← more from
SideOneDummy Records
Get fresh music recommendations delivered to your inbox every Friday.
We've updated our Terms of Use. You can review the changes here.

by Big D and the Kids Table 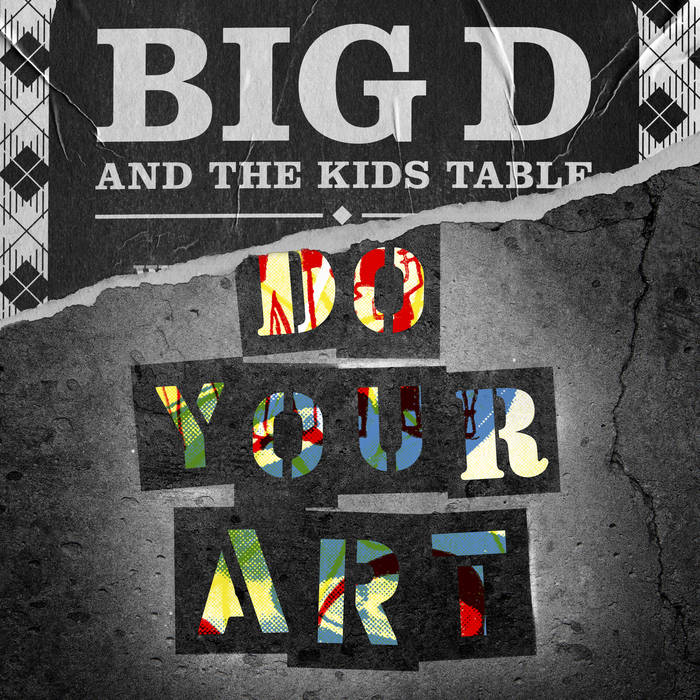 Angstiety Love the track Too Much! Can't wait for the full album!! 🤘

DO YOUR ART finds Big D and the Kids Table sounding as fresh and inspired as ever for their fifth album with SideOneDummy Records. Produced and engineered by Reel Big Fish’s Matt Appleton, DO YOUR ART is a musical melting pot, highlighting the band’s versatile talents and delivering a mixture of punk, ska and dub-reggae songs, as well as a few creative tracks that frontman David McWane cut-up and dubbed-out from his favorite '60s B-films. The 20-track album is truly a moveable feast. And what’s moving are your feet!

When David McWane sets out to write a new Big D And The Kids Table album, he has one main goal in mind: to make the iconic kind of record that he loved as a teen. As a teenager, David and his friends would drive around aimlessly, listening to albums that would form the soundtrack to their youth. Timeless music that years (and even decades) down the line, they’d never quite forget. It’s McWane’s hope that DO YOUR ART will define similar moments for people now and become a cherished memory of these days and times. “I write every record for that aimless teenage car ride,” he admits.

DO YOUR ART is packed full of yet another blast of the energetic uplifting ska-punk tunes that fans have come to expect from Big D and the Kids Table: There’s the boisterous, breakneck party-starting “Dead Bottle,” the bitter black humor of “Sociopath” and the frenzied fun of “Metal In The Microwave” (the latter two, says McWane, are “to remind people of the simple things!”). Then there’s the politically-charged stomp of “Dispirit,” and “Med Her Lazy,” a song which ethically challenges that medications should be for the well-being of a child, not over-prescribed for the convenience of those around them such as teachers and parents. Elsewhere, the jaunty “New Day” turns heartbreak into a positive new opportunity, while the laid-back melancholy of “Beautiful Way” finds defiance, hope and acceptance in oblivion.

DO YOUR ART is an inherently political mission statement delivered with gusto and enthusiasm to anyone creative to remind them to keep going, even if the odds are increasingly stacked against them in this hyper-capitalistic society.
“I wanted to instill in all artists to keep doing it,” says frontman David McWane. “Life might pull you away with its demands: but don’t give up. Every musician, artist and dancer needs to realize that there’s magic inside of them that other people just don’t have. Always use that magic.”

It has been eight years since Big D and the Kids Table released original music (2013’s double whammy of Stomp and Stroll). In that time, the members of Big D have kept themselves busy with projects The Doped Up Dollies (co-fronted by McWane’s wife Brianne) and Boston panic-rock outfit CUIDADO. Toss a growing family with two young children into the mix, and that’s one hefty schedule for McWane, who still makes that time to do his art!

“I definitely want this record to be helpful for people mentally,” says McWane. “It’s somewhere for them to go to and laugh. So listeners can focus on recognizing all the good things in their lives—all the beauty, and all the people who love them—and make sure to enjoy their life and DO YOUR ART!”

Samples, Cuts and Dubs by David McWane
Produced and Mixed by: Matt Appleton
Basic Tracks recorded by Richard Marr and Matt Appleton at Galaxy Park Studios
Mastered by Jeff Lipton and Maria Rice at Peerless Mastering
Side One Dummy records

Big D’anks to Steve Foote and Derek Davis for the early rehearsal writing of DO YOUR ART.

DO YOUR ART:
No matter how difficult life becomes or how old you become, never forget to do your art; It is the magic inside you.

Big D and the Kids Table front man David McWane has said, "There are people who want to be in a band and then there are musicians." Once in a while a group comes along that makes music simply because they have no other choice - they are addicted musicians. McWane describes the group as - "Modern American gypsies."

New album, DO YOUR ART, featuring the singles "Toyed" and "New Day" is out now! ... more

Bandcamp Daily  your guide to the world of Bandcamp

Sampa The Great joins the show to discuss her release, "As Above, So Below".